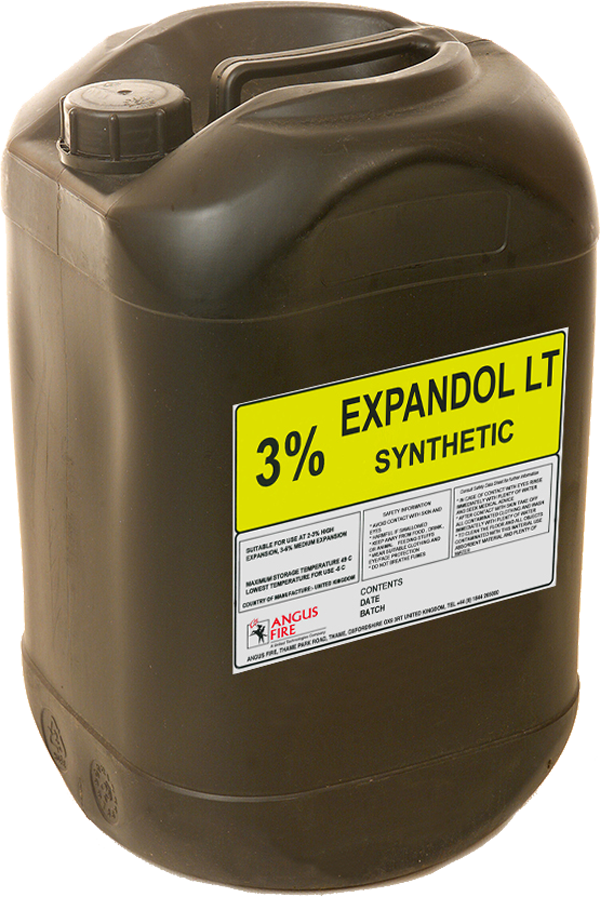 Its unique formulation is a blend of high activity synthetic foaming agents and foam stabilisers specially formulated to produce an extremely stable long-lasting foam. Expandol LT has been formulated primarily for use at medium and high expansion, and it is effective on a wide variety of Class A and Class B fire risks. The finished foam has drainage characteristics far superior to those of standard detergents which increase its ability to carry water to the fire, acting as a positive aid to effective fire extinguishment.

Expandol LT is extremely economical. For example, when used with the Hi-Combat Turbex Mk2 high expansion foam generator, 200m3 min-1 (7000ft3 min-1) of finished foam can be produced at an expansion of 1200:1 for a consumption rate of nominally 5 l min-1.

Expandol LT is the ideal foam to use at medium expansion at minor incidents such as small hydrocarbon liquid spill fires where close approach to the fire allows handheld apparatus to be used. It can also be used in conjunction with fixed installations to provide bund protection, where it can achieve extinction of fires or suppression of toxic vapour release after chemical spillage.

Expandol LT is intended for use at:

Expandol LT gives best results when used with the Angus Fire range of high and medium expansion foammaking equipment. It may also be used satisfactorily with other manufacturers' equipment.

* These vary depending on the performance characteristics of the foam. These are the properties given when tested with Angus Fire Equipment.

Expandol LT is suitable for use in combination with:

Expandol LT is exceptionally stable in long-term storage. A shelf-life of at least ten years may be expected if it is stored properly.